Heavy metal separation and immobilization agent
Heavy metals are a considerable part of the environmental pollution. They occur in water and soil in the form of their dissolved formeor in compounds that dissolve easily. Mercury, arsenic, lead, cadmium, copper, zinc, etc. are toxic and must be removed from the water cycle and soil.

There are several theoretical possibilities for separating heavy metals from wastewater:
Precipitation, ion exchange, electrolysis, ultrafiltration, can all de utilised. Only precipitation is suitable for the treatment of large volumes of dirty waste water, however, whereby the heavy metals are rendered insoluble,”precipitated” by the addition of a precipitation agent to the water. The precipitated sludge can be removed from the water by sedimentation and filtration.

The precipitation can be carried out using hydroxide, carbonate or sulphide depending on which precipitant is added to the waste water. Until now, hydroxide precipitation has been widely accepted in practice because it is particularly cheap. Most acidic heavy metal waters are neutralized by adding alkaline solutions, whereby the heavy metals are precipitate as a hydroxide, i.e. they are bound to hydroxide ions. Neutralizing agents such as caustic soda (sodium hydroxide) or lime milk (calcium hydroxide) are also used as precipitants in this process. 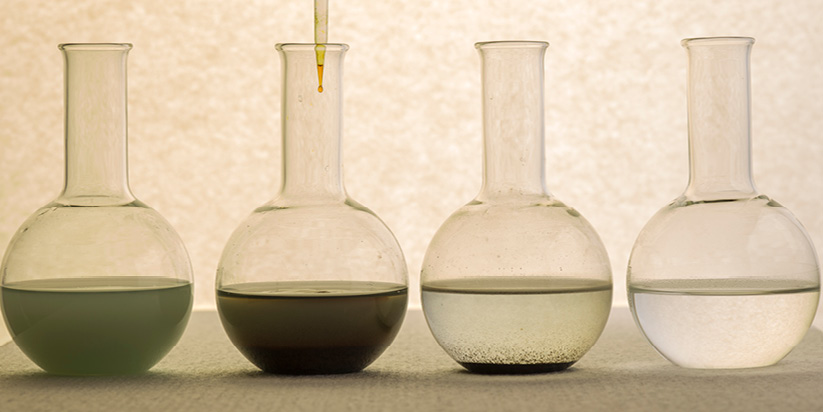 Despite its enormous advantages and popularity, sulphide precipitation has not been able to establish itself to this day. On the one hand, the danger of releasing hydrogen sulphide gas, which arises during the sulphidic treatment of acidic waste water, is so great that it cannot be reliably contained even with considerable effort in apparatus, measuring and control technology.
Hydrogen sulphide is also toxic, comparable to hydrogen cyanide. In addition, the also toxic sulphides also remain in the purified water.

PreciPAN® – – means and processes, realizes sulphidic precipitation with its enormous advantages and without the above mentioned. serious disadvantages. The polysulfide nature of the agent guards against the release of hydrogen sulphide during the waste water treatment process.

Excessively high doses of PreciPAN® should not present problems as the residues of precipitants decompose into harmless sludge during precipitation and other treatment – also due to the chemical system.
Most heavy metals are present in wastewater as mono-, di- or trivalent cations and can thus be precipitated with relative ease. However, there are metals such as chromate and vanadate, which are polyvalent and anionic and are not accessible to precipitation. They are reduced with PreciPAN® in the acid medium and then precipitated.
PreciPAN® also eliminates a number of the usual anionic pollutants such as cyanide, nitrite, sulphite or free chlorine, e. g. sulfite to sulphate, cyanide to rhodanide (and then precipitate). The same applies to fluoride, silicofluoride, oxalate, citrate, tartrate, phenolates, fatty acids and other ionogenic surfactants. Weak acids and other anionogenic substances, including complexing agents, are protonated and thus their binding to the medium water is destabilised. Emulsions are split, oils and fats are released.

The released lipohil substances are readily adsorbed on the also hydrophobic, sulphidic precipitate and thus removed from the water into the sludge. All colloidal systems, amphoteric substances, proteins, oligomeric brines, as they are often used in modern technologies and can reach their isoelectric point by gradually increasing the pH value and thus can be excrtracted. In laboratory tests (treatment of various waste water with PreciPAN®) such turbidity and flocculation can be observed more often during the course of the pH increase.

The investigation of an unknown waste watersample is started with the standard method. If the water is not already acidic the pHis adjusted to 4 with a little hydrochloric acid and add a small amount of diluted PreciPAN® solution (PTL). Cloudy, mostly black precipitation forms, which flocculates after a short time. By adding further drops of PTL, it can be determined whether the precipitation (at pH 4) is complete. If the precipitation is complete the pH can be increased with lime milk to approx. 6 and drip addition PTL is repeated. The sample is then neutralized with lime milk to pH = 8. After the newly formed precipitation is flocculated, the water is filtered and determined by acidification and addition of PTL whether the precipitation agent has been sufficiently dosed, under- or overdosed.

A large part of the waste water types can be investigated and treated using this simple method. However, there are exceptions with complexing agents, high salt content, solutions contaminated with surfactants, buffers, etc. In these problematic waste waters, which are considered untreatable, PreciPAN® still offers the possibility of removing heavy metals in accordance with the law by developing special strategies, but for the development of a suitable process, it is necessary to carry out weeks of application research, sometimes even basic research.

PreciPAN®, means and processes, has been successfully tested in more than 100 plants from almost all branches of industry.